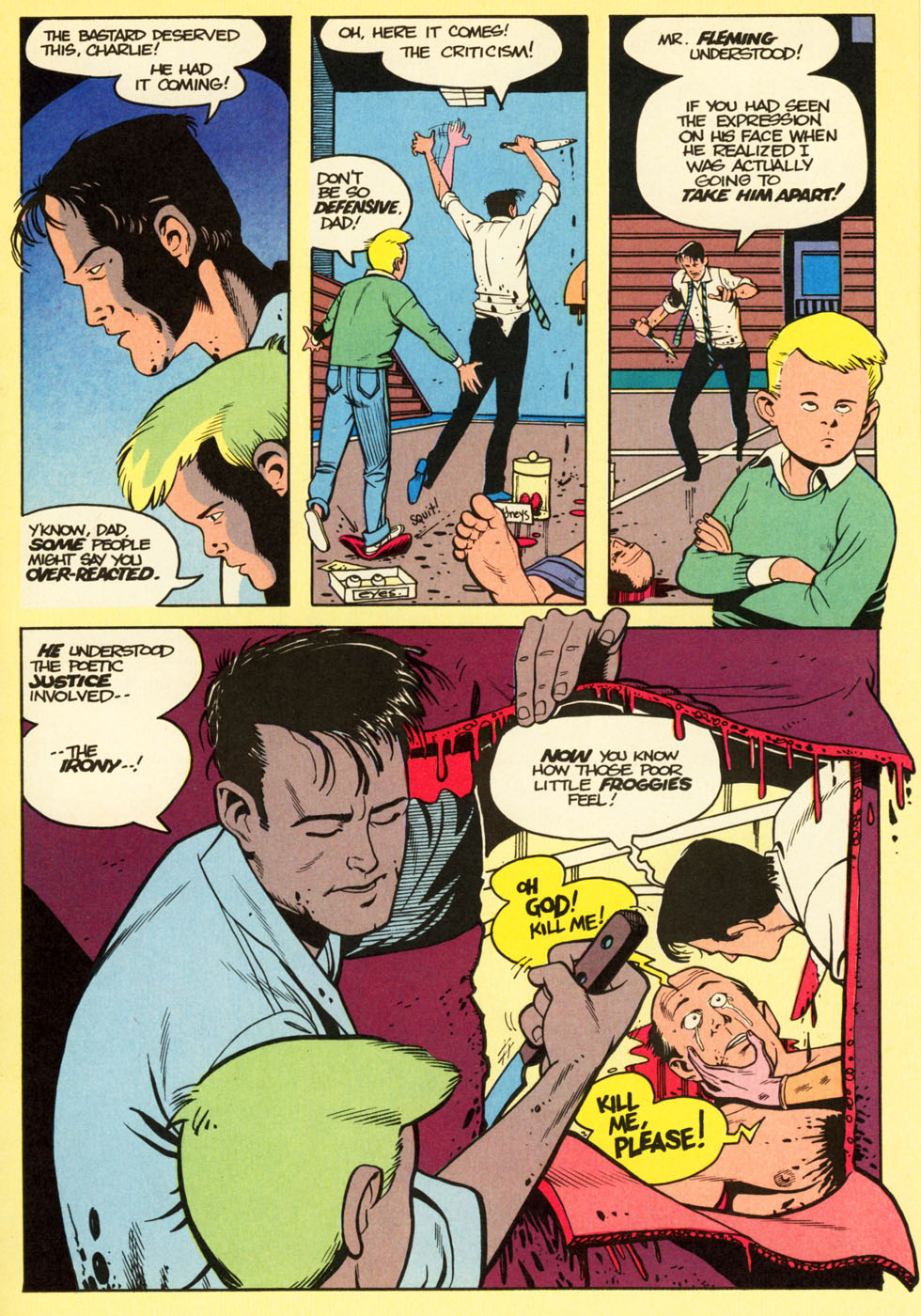 Wasteland (John Ostrander, Del Close & various artists) - A really strange beast, hard to imagine that DC ever even published this weirdo series. It's a horror anthology, written by John Ostrander and improv guru Del Close, and drawn, at first, by a cast of four artists (David Lloyd, George Freeman, William Messner-Loebs, Don Simpson). This group doesn't stick to the usual horror formula, opting instead for psychological and metaphysical horror — more than anything, it's the horror of living in a fucked-up world. The stories are some combination of bizarre, druggy, darkly humorous, creepy, politically satirical, ridiculous, ugly, unsettling, but seldom outright horrific. In 18 issues, each of which housed 3 short stories, only rarely did Ostrander and Close resort to the usual supernatural/gore touchstones, instead opting for weird morality studies, futuristic satires, grim studies of fragmenting mental states, and absurdist glimpses into Close's autobiography, most of which are footnoted with admissions that some of the truth has been, shall we say, tweaked, deliberately calling into question just how true these crazy "true stories" are. Like any anthology, not all of it is great or even good, but collectively it's a great work, and there are stories and moments that stand out as especially bracing and powerful.

Some of Close's ridiculous autobiography is just tiresome, but at his best he's entertaining, especially in a weirdly profound encounter with L. Ron Hubbard, and a two-parter about a theater troupe in a violent mining town. Issue #3 is one of the best all-around issues, opening with a bizarre, richly ambiguous Close/Simpson pastiche of American Splendor, then delivering Ostrander/Lloyd's "Dies Illa," one of the series' most horrifying and creepiest vignettes, pairing Lloyd's muddy, grimy art with Ostrander's jaw-dropping portrait of a cop gradually coming to believe in an impending apocalypse — and experiencing a metaphysical rather than religious hell. In #4, Ostrander and Freeman memorably build a tale of Reagan-era suicidal angst around a Shakespeare sonnet. In #5's "Big Crossover Issue," Close and Ostrander meander through a metafictional reality, illustrated in a less stylized vein than usual by Lloyd, in which various DC superheroes wander into the frame, with Swamp Thing memorably mooning the audience with a flower growing out of his butt. #15 has Ostrander and Close exploring mortality and memory through "Zero Hour," with Joe Orlando providing whimsical images that evoke Peanuts at first, only to gradually become experimental and fluid as the story's logic breaks down and reforms, and the whole thing takes on a new meaning. There's also the Ostrander/Loebs "Dead Detective" trilogy, which seems simultaneously nostalgic for old genre forms and all too sadly aware of their irrelevance in the grim and complex modern age - the literally dead anti-hero of these stories sits stoically at his desk, understanding nothing, doing nothing, blood oozing from the bullet wound between his eyes as the world goes crazy around him.

#11's "Dissecting Mr. Fleming" — by Ostrander/Close with Ty Templeton guesting as artist — is probably the highlight of the whole series, an offhandedly amoral slice of gory horror, the shuddery terror of which is increased tremendously by Templeton's slick, cartoony images and the ending's golly-gee moral takeaway. It's a great story, well worth seeking out on its own, and it makes great use of the cartoony style, so different from most of the anthology's artists. The series concludes, in #18, with the only issue-length story they ever did, a hallucinatory trip back through many of the preceding stories, weaving them together into a dense and metafictional pastiche, written by Close/Ostrander and drawn by several of the series' most frequent artistic contributors. It's a great way to wrap it all up, revisiting the themes of alienation, questioning reality, and mundane horror that had driven the preceding 17 issues.

Throughout, there are plenty of throwaway tales, too, and at least a few that resort to groan-enducing twist endings of precisely the kind that most of the series tries very hard to avoid. Still, the high points are well worth the trip, and even when a particular story or issue isn't up to snuff, the overall spirit of experimentation is hard not to love. This book often feels more like 70s underground comix than anything at the Big Two, including even, or especially, the old anthology horror books from which it was ostensibly taking its format. The stories are weird, and the art is quirky and individualistic, with each artist imparting his own skewed style onto his contributions. Today, it probably wouldn't even be made at either Marvel or DC, and it's something of a miracle that DC put out 18 issues of this even in its more experimental and daring pre-Vertigo days. It's odd, too, that Wasteland isn't discussed more often as one of DC's predecessors to Vertigo — if it had been put out a few years later, it would have fit in very nicely indeed alongside the rest of the inaugural Vertigo line, and it definitely belongs in that conversation with Swamp Thing and Hellblazer and the other out-there stuff DC was doing in the late 80s and early 90s. It's a really interesting series, a nearly forgotten artifact of corporate comics' weirder fringes.
Posted by Ed Howard at 7:00 AM

Email ThisBlogThis!Share to TwitterShare to FacebookShare to Pinterest
Labels: Wasteland 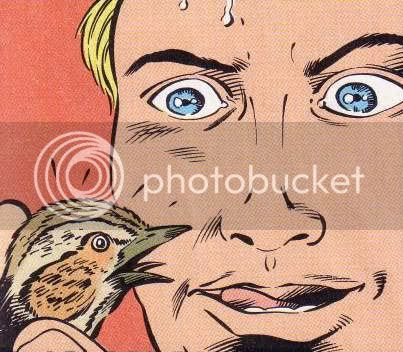